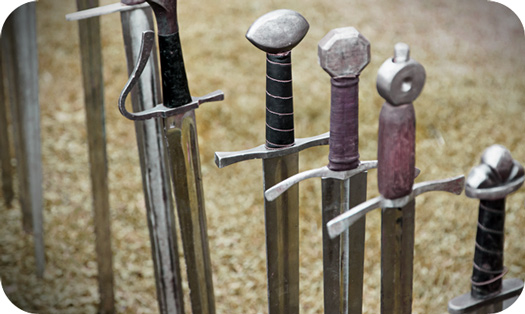 About Five of Swords
Meaning in Tarot

If you’ve done your fair share of researching various perspectives on the five of swords Tarot card meaning, you’ll know interpretations for this card are all over the place. Some sources take a stance of cruelty emanating from the card. Others see themes of self-sacrifice in the card. Still others offer interpretations of trickery.

When in doubt, I always look to the card preceding the one I’m focused on (in this case the Four of Swords meaning) for clarity. Why? Just like any good book, the Tarot builds momentum, its plot thickens. Knowing one card is a product or has been birthed from the previous card gives us a foothold on meaning.

With that in mind, the five of swords Tarot card meaning is born out of a place of deep inner reflection and contemplation as seen in the fourth sword card.

Keywords for the Five of Swords Tarot Card Meaning:

An interpretive snapshot: Our figurehead has emerged standing triumphantly from a challenge. He is the victor, having won the challenge that threatened his beliefs.

Where am I getting this? We know the suit of swords speaks to us of thoughts and beliefs. Our victor stands holding the majority of his shares (thoughts/swords) intact. He has gotten his point across and is met with no further conflict by would-be nay-sayers. Indeed, these usurpers seem to concede or surrender; relinquishing the honor of righteousness to our figurehead in the card.

The concept of challenge surfaces in the presence of mountains in the cards. We get the feeling a long-standing opposition has been held, and through quiet persistence (as visited in the four of swords) the mountain has been conquered.

I get the idea that faith or beliefs are either upheld or amended in this imagery, primarily from the Morgan-Greer version (center card image up top). Notice how the fallen swords are in the formation of a cross – an orthodoxy-like (entrenched-faith) connotation? Meeting at a crossroads in traditional beliefs?

Unquestionably, the best interpretation I’ve encountered for this card is provided by Onno and Rob Docters van Leeuwen in their book: The Complete New Tarot (if you don’t have this book, it’s a must-have in any Tarot scholar’s library).

Onno and Rob classify the five of swords Tarot card meaning as: “Remembering the Self.” To paraphrase their interpretation:

“Through the reflective time in the cards, we have overcome ourselves and our inner enemies and identifications which sap our energies. These are personified by the defeated persons walking away in the background. These having dropped off from our experience, a new goal and plan for life can originate.”

I’m particularly fond of the keyword “amputation.” The implication urges us to cast off, or amputate those aspects of our lives that no longer serve the goal or plan the van Leeuwen’s speak of.

Some featured symbols in the Five of Swords Tarot card meaning:

Mountains: Seen on many of the cards, mountain symbol meanings deal with triumph, challenge, attainment, and realization. Mountains also represent timelessness and an endurance that is infinite. When those mountains peak out of the cards into our attention, we may consider the vastness of our universe, and contemplate our place within it. We may also want to consider the heights to which we are climbing, and what the realization of our goals may mean for us and those around us.

Ocean: Ocean symbol meanings deal with infinite possibilities. Consider the ocean, and you will be considering the essence of vastness, mystery, and depth. It seems inexhaustible and the holder of wonderous things unseen. When the oceans in the cards crash their waves against our consciousness, it is time to pay homage to the great divine – meaning we should recognize the burgeoning power around us, the animating force that runs through us – the expansive and expressive nature of the universe. In other words, we must acknowledge that there may be other (higher) powers at work in our lives and it may be time to release our control in order to allow these powers to open up incredible opportunities to us.

Questions the Five of Swords asks us:

Nine of Pentacles Meaning
Six of Swords Meaning
Meaning of Numbers in Tarot
Dream Meaning and Tarot
Nine of Cups Meaning
Tarot Meanings Dictionary for Tarot H-P
TarotTeachings.com is a trusted Etsy affiliate & Amazon Associate. As such, the website features sponsored products for Amazon or Etsy. Should you make an Amazon or Etsy purchase from a link on this website, TarotTeachings may receive a small commission. Thank you for your purchases, as it contributes to keeping this website online and running. See my policy page for more information.