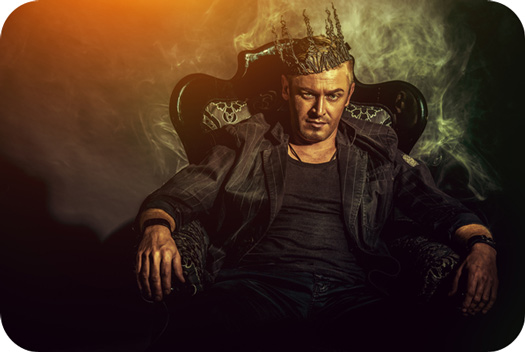 The father figure of the Tarot deck, the Emperor Tarot card meanings are all about advice, wisdom, authority, and grounding. Take a moment to observe the Emperor card. It becomes apparent that this is a character who has been there, done that, and has the battle armor to prove it. The Emperor has obtained his wisdom through experience. He’s been through the wars, he’s ruled his people wisely, and he’s experienced all life can throw at him. What better source for advice than a battle-tested, thoughtful, strategic ruler?

Look more closely at the card, and you will detect a scrutinous quality in his eyes. When you’ve seen everything the Emperor has seen, you would have cause to be a bit skeptical too.

This contributes to the Emperor as the perfect authority figure. He is as wise as his years because caution has served as the better part of valor in his life.

This makes him an excellent source of wisdom and advice. He does not become carried away by fad or fancy – he sees through the most clever of disguises and nothing slips by his scrutiny.

When we pull this card in a reading we get an instant “grounding effect.” In areas of business, we are encouraged to consider all the facts, revisit our strategic plans, reconsider our partnerships, and re-evaluate our allegiances.

When we are unsure of circumstances, the Emperor reminds us that sometimes “doing” is the only method we have for “knowing.” Another tip – the Emperor is a master of his own making, and when he shows up in a reading, we would do well to realize our own inner strength and motivation is what makes us a leader.

This section focuses on a few select symbols that can help us further define the Emperor Tarot card meanings.

Beard: As mentioned earlier, the Emperor has “been there, done that” and the beard is a symbol of his experience. As an archetype, we commonly see masculine figures of authority or father figures with long white beards. It reassures us that this man has acquired years of wisdom and experience – he is worthy of listening to because he’s seen first hand the effects of his own actions. He offers us the gift of his own life example – a short-cut because when we heed the advice of our elders we can often avoid repeating the same mistakes.

Ram: Featured prominently in most decks, the head of the ram is a symbol of determination, action, initiative, and leadership. The ram is also a symbol of Aries, which is the astral ruler of the Emperor. Aries is the first sign of the Zodiac, further reinforcing attributes of leadership, authority, and other forefather-type characteristics.

When contemplating the Emperor Tarot card meaning, ask yourself the following questions…

Four of Cups Meaning
Understanding a Tarot Deck
The Elements of Astrology: Fire, Earth, Air & Water Signs
Empress Tarot Card Meanings
Eight of Swords Meaning
Five of Wands Meaning
TarotTeachings.com is a trusted Etsy affiliate & Amazon Associate. As such, the website features sponsored products for Amazon or Etsy. Should you make an Amazon or Etsy purchase from a link on this website, TarotTeachings may receive a small commission. Thank you for your purchases, as it contributes to keeping this website online and running. See my policy page for more information.