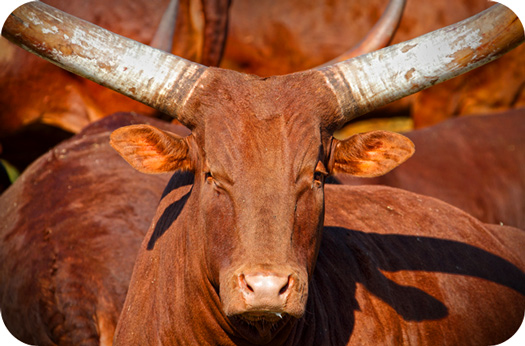 Bull Symbolism
In the Tarot Cards

The bull symbolism often points to the Taurus, one of the four fixed signs in the zodiac in the Rider-Waite deck. We see this in the Wheel of Fortune and the World cards.

As a Taurus trait, we pick up the symbolism of hearth, home, stability, provision, and a bit of a stubborn nature. Stubbornness often takes on a negative connotation, but I’m not inclined to play along with that bad rap. I rather appreciate the stalwart ways of the Taurus. I love the amazing conviction Taurus personality types convey – they are true to their inner vision.

And this is what the bull symbolism in Tarot is all about: Being fixed on one’s own faith. The bull will charge into insurmountable scenarios in order to see its way through to the end. Often when the bull shows up in our readings we are dealing with a client who is incredibly determined to see his/her Vision to its conclusion.

Bull symbolism in Tarot deals with:

Bulls also speak to us about provision, fertility, and sensuality as it is an ancient archetype. Bulls have provided man with resources (food, clothing, transportation, industry, enhanced agriculture/harvesting methods) and as a result, history has placed great esteem where the bull is concerned.

The bull has a peaceable nature (in spite of its ability to aggressively defend its position if necessary). This makes it an amicable friend to mankind.

When the bull charges in your readings consider it as a peaceful giant in your awareness. Bulls in the Tarot will give you a message like:

Things to Think on Regarding Bull Symbolism in Tarot