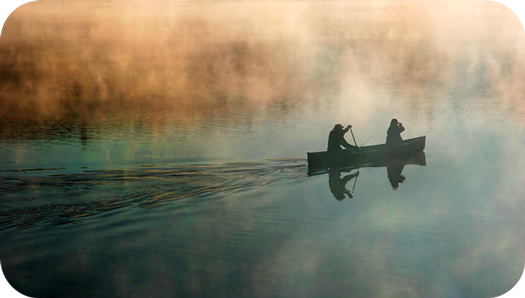 About Six of Swords
Meaning in Tarot

I frequently bring attention to the directions of the figures in the cards. When we see backs turned in the card, it’s often a sign of turning away from past events. In the six of swords card, we’re moving away from the past, moving into the future with the hope and promise of being “loaded up” with the peace we seek.

I’m not painting a grim interpretation of the six of swords Tarot card meaning. On the contrary, any action to move away from pain is always a step (or oar-stroke) in the right direction.

I’d like to point out a few interesting symbolic tidbits in the six of swords Tarot card meaning that are uniform in most deck renditions:

This card simply asks the questioner to:

Boat: Boats are a sign there are some pressing thoughts rumbling within the subconscious. These thoughts will have a tendency to put us in motion, and this is another symbolic trait of the boat. Boats deal with deeper thoughts and the motion (to action) these thoughts produce. In a reading, boats may also indicate travel, or movement in a different direction (usually after much thought and deliberation). See also the “Ship” symbolism.

Ship: Some renditions of the Tarot show a ship on this card (depending on the deck you’re consulting). Ship meanings deal with travel and journeys. However a commonly overlooked factor is the medium upon which they said – water – it deals with the deeper levels of the psyche and the subconscious. When Ships sail across your vision in a reading, take into consideration where your thoughts (psyche) are traveling – what kind of baggage (cargo) are you carrying around, and are you charting (navigating) out the best course for your thoughts and emotions?

Children: Children represent promise, hope, fresh starts, new beginnings, new ideas, and a fresh way of looking at the world. Children are full of promise for the future and as such, they are a symbol of this promise. When they show up on the cards in a reading it could mean the beginning of a new venture, the promise of a new beginning, or it could literally mean children are on their way (new births/adoptions).

Some Questions the Six of Swords Asks Us: