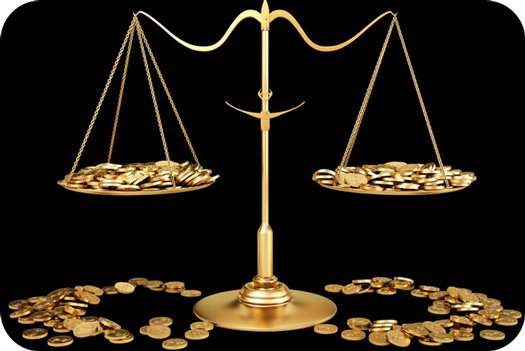 About Six of Pentacles
Meaning in Tarot

At the time of this writing, I’ve been fixated on hands and their symbolism. And so, I could not help but notice the activity of the hands in the six of pentacles.

We can easily grasp the message of giving and receiving in the card as we observe these hands. But, I’d like to make a specific point of interest. Note the right hand (both in Rider-Waite and Morgan-Greer versions far right and center images respectively).

Keywords of weight in the six of pentacles Tarot card meaning:

The right hand of our hero formed into the Kubera mudra.

Mudras are symbolic hand expressions born from Hindu and Buddhist cultures. Shapes made from hands hold specific symbolism and are used to convey special meaning in cultural art and history. Pay attention next time you observe Hindu or Buddhist illustrations of their deities – you’ll see their hands are depicted in very specific positions. These are purposeful, and those positions hold symbolic meaning.

The Kubera mudra symbolizes wealth. Indeed, Kuber is a Hindu god of wealth. Mudra practitioners mimic this hand position (index finger and middle finger pressed against the thumb with ring finger and pinky finger retracted) as means of signaling their allowance of wealth and abundance in their lives.

Also noteworthy, is this mudra stimulates the root chakra the seat of primal life force and physical well-being.

Of course, it takes more than a hand position to tap the flow of wealth into our lives, and the six of pentacles indicates a need for balance, good judgment and prudence as well. The element of balance is emphasized as we see recurring themes in the scales, as well as two sycophants – one on either side of the merchant.

Further, the number six underscores the theme of balance. Note the triad of suspension wires on each side holding the weighing platforms. This indicates the creative power of threes in both light and dark sectors of life. Together they form a perfect creative balance embodied in the number six.

When the six of pentacles shows up in our readings we can consider our own balances. Moreover, we might consider our physical position and how we may purposefully place ourselves in positions better suited for giving and receiving. That’s why I like the mudra analogy so much. It expresses a purposeful intent to stimulate a response from our environment.

Some symbols for our mind to weigh in the six of pentacles Tarot card meaning:

Hand: Power, protection, the act of proffering as well as obtaining all come time mind in the use of hand symbolism in the Tarot. Hands are historically seen as points of transmission, meaning we give and receive from hands (energetically and physically). It’s no accident that the powerful ace cards are all depicted with a hand holding the suit symbol. This is a clear message of force and power relating to the indicated suit. It is also a reminder that we are able to both give and receive those attributes pertaining to the referring suit. Get more about hand symbolism here.

Scale: As one would guess, scale symbol meanings deal with equality and balance. It is a perfect visual measure when something is “out of whack.” The scale in all its precision shows us which part of our life is out of balance – when the scale is tipped more to one side we know we need to take some corrective action.

Some questions to balance out the six of pentacles Tarot card meaning:

Seven of Pentacles Meaning
Two of Pentacles Meaning in Tarot
Lessons from Tarot Teachings
Eight of Swords Meaning
Nine of Wands Meaning
Two of Swords Meaning in Tarot
TarotTeachings.com is a trusted Etsy affiliate & Amazon Associate. As such, the website features sponsored products for Amazon or Etsy. Should you make an Amazon or Etsy purchase from a link on this website, TarotTeachings may receive a small commission. Thank you for your purchases, as it contributes to keeping this website online and running. See my policy page for more information.