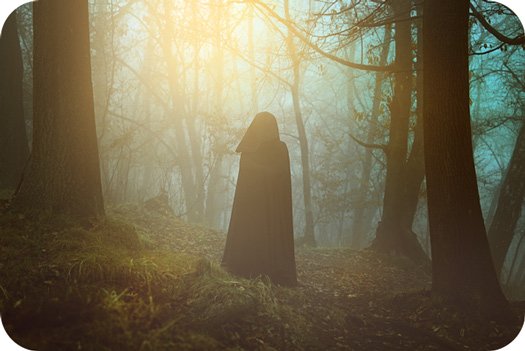 In our fast-paced, harried world of today, we would all do well to do as the hermit does. In fact, hermit Tarot card meanings are all about keeping our pace and listening to our inner self (rather than listening to the world outside).

The Hermit’s stride is slow but sure. He takes each step with a deliberate, conscious approach – knowing that each step of the journey is a small imprint upon the larger picture of his path. He does everything in this manner – each breath he takes, each word he speaks, every decision he makes is a deliberate act.

This is one prime source of the Hermit’s wisdom. In recognizing that each of our thoughts and actions is a brick we use to build our lives, we partake in the creation of our own reality.

In much the same way, by turning off our telephones, switching off our televisions, and removing ourselves from the barrage of external chatter – we are able to finally hear the small voice from within that leads us to higher ground.

The Hermit walks a fine line. By purposefully choosing to remove himself from society, he also runs the risk of being misunderstood and labeled inappropriate.

These labels do not concern him as his path of spiritual knowing and higher wisdom are his prime concerns.

The path of the Hermit is certainly not for everyone, but we all have parts of ourselves that need a little quiet time at the least. When the Hermit shows up in a reading it often refers to a need to be still, contemplate, meditate, observe what is going on before any further action is taken.

This section focuses on a few select symbols that can help us further define the Hermit Tarot card meanings.

Staff: Appearing as an attribute among pilgrims, saints, and even priests, the staff is an emblem of power and authority. The staff is in the Hermit’s left hand, representing the hand of higher awareness (subconscious mind). In this case, the staff represents the Hermit’s ability to use his isolation and the knowledge he has gained as a tool upon his path to even higher levels of awareness. Get more about symbolic staff meanings in the Tarot here.

Stance: The Hermit stands upon the precipice of an icy mountain. This symbolizes the heights of his journey and further intensifies the feeling of his isolation. Mountains typically symbolize achievement, growth, and accomplishment. The symbolism, in this case, is the Hermit has achieved his goal and he is continuing the path he has chosen, committed to his endeavor of ultimate awareness.

Star: The star of David shines brightly within his lantern. Biblically, David means “beloved of God” and so the light from the star symbolizes the light of God. Further inspection of the star reveals that it is comprised of two triangles, one inverted, the other erect. This is a common symbol for male & female or opposing/balancing energies. In the context of the Hermit, this symbol represents balance and using the energies together for the purpose of spiritual advancement.

When contemplating the Hermit Tarot card meanings, ask yourself the following questions:

Four of Wands Meaning
The Death Card in a Reading
Elements and Understanding Tarot Suits
Meaning of Tarot
Medicine Wheel and Tarot Suits
Lessons from Tarot Teachings
TarotTeachings.com is a trusted Etsy affiliate & Amazon Associate. As such, the website features sponsored products for Amazon or Etsy. Should you make an Amazon or Etsy purchase from a link on this website, TarotTeachings may receive a small commission. Thank you for your purchases, as it contributes to keeping this website online and running. See my policy page for more information.