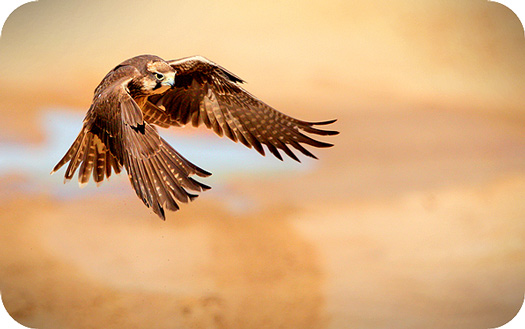 Maybe I’m a bit preoccupied with the falcon meaning in Tarot, because I discuss it at length on the card it’s featured: The Nine of Pentacles. But falcons are such a cool Tarot symbol, I just had to devote a page to it.

Outside the high-symbolic ideals, I interject on the 9 Pentacles page, I think it’s the idea of snatching up the object of our focus that delights me about the Tarot falcon.

Unanimously, symbolic falcon meaning in Tarot (as with most birds of prey) deals with a keen sense of focus. They hone their sights on something (food, typically), and with awe-inspiring skill and accuracy that nab their prey in a single deft move.

If they can do it, we humans can too. The nine of pentacles is a card of opulence, refinery and depicts a scene of luxury. I believe that falcon is there to remind us we are capable of letting loose our higher guides and intense focus with intent to hunt down the riches we desire. Of course, one man’s riches is another man’s folly. I’m not talking exclusively about material wealth. I am talking about stalking a sense of security and healthful abundance in our lives.

Keywords to Falcon Meaning in Tarot

I also value the idea of falcons (as well as other birds trained in the sport of the hunt & messaging through the history of mankind), working together with humans. In its heyday, falconry was a very big deal. Training a raptor, and having the honor of displaying your birds’ skill was tantamount to making the grade at NASCAR. Huge!

Training a bird into excellence in the art of falconry was a constant process. Falconers were repute to spend 24/7 with their birds: Eating, sleeping, training with their avian ally ’round the clock. Most falconers would report a symbiotic bond forming between bird and human. Makes sense. I like the idea of animal and human becoming a whole entity – joined together by a vision – a common bond.

So, let’s take that same idea of falconry and lay it down as a metaphor. What if we had magnificent entities associated with our souls that, with intense focus on training, could take flight outside of our physical bodies and (in a sense) do our bidding for us in the ephemeral realms. I’m talking about the aspects of the human soul that serve as companions to us in energetic dimensions.

In this metaphor, I’m suggesting we each have a kind of spirit-falcon resting on our shoulder. By establishing a regime of getting to know this spiritual entity, communicating, and training this energetic being, we can hone in on the desires of our heart. And, with the aid of that spirit-guide, we can capture the proverbial gold we seek.

If nothing else, let the falcon meaning in Tarot (nine of pentacles) remind you that with an investment of attention, and a willingness to collaborate with energetic aspects that are uniquely you (but able to function outside of the physical you), incalculable things can happen.

Give it a try. Re-adopt that spiritual guide waiting patiently by your side. Communicate, cooperate, interact, and then set upon the task of focused training with that guide. In doing so, you train yourself in taking aim on your desires and casting out a greater part of yourself with the goal of obtaining your high-desires of freedom and accomplishment.

Since I’m so enamored with the falcon meaning in all its potential, I’ve written more about it. I invite you to take a look at some other symbolic thoughts I’ve had about the falcon here:

Falcon featured in the cards (Rider-Waite):

Fish Meaning in Tarot
The Symbol on Rider-Waite Tarot Cards
Caduceus Symbol Meaning in Tarot
Brick Wall Symbolism in Tarot
Arch Meaning in Tarot
Symbol Meanings of Tarot Introduction
TarotTeachings.com is a trusted Etsy affiliate & Amazon Associate. As such, the website features sponsored products for Amazon or Etsy. Should you make an Amazon or Etsy purchase from a link on this website, TarotTeachings may receive a small commission. Thank you for your purchases, as it contributes to keeping this website online and running. See my policy page for more information.