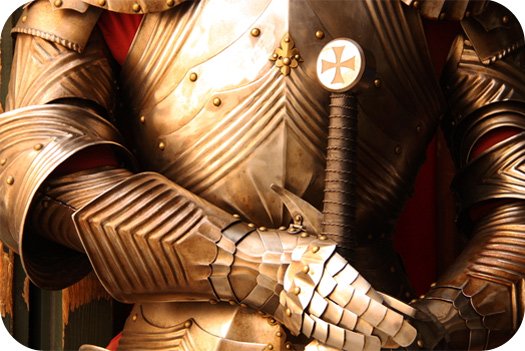 Rather than take the meaning of armor literally in the cards, I propose a metaphorical stance. When we look at armor symbolic meanings, let’s approach it from both a defensive and an internal view. Here’s what I mean…

Sometimes in a reading, I’ll get imagery of shiny, reflective armor in the cards. When this happens, I know I’m in the presence of a catalyst – a person who is skilled at reflecting back, like a mirror, the attitudes, and behaviors of others.

What if all of us lived in reflective suits of armor? This would mean all those who come face-to-face with us would see their own reflections shining in our suits of armor. What would that mean on an intuitive level? Would it mean all those around us would see their own beauty shining back at themselves? Alternatively, would it mean unpleasantness would return to the observer too?

It’s kind of a karma thing, isn’t it. What comes around goes around.

In other readings, armor entering my higher vision conveys a message of self-preservation, and my client has donned a suit of armor for self-protection.

I’ve found in certain sessions my clients have suffered a great deal of strife and abuse. They’ve built a suit of armor to protect themselves from further abuse. During the reading I like to encourage my clients to envision those reflective qualities of armor. I ask them what it would feel like to have the ability to reflect behaviors back to the initiator. I ask them to give it a try, and do so with as much love and compassion possible.

The intent here is to step out of the role of victim. When done with pure intent, this karma-reflection exercise can restore the true symbolic meanings of armor which deal with strength, courage, valor and honor.

At its most surface level, suits of armor in the Tarot symbolizes preparation for whatever is thrown our way in the saga of life. It does not have to mean we are preparing for war, but sometimes that is precisely what our intuition accurately picks up in a reading.

Also bear in mind the diverse roots of Tarot are through Arthurian and Knights Templar lineage. So, when you are reading and armor really shines out brightly to your awareness, give thought to the concept of truth, justice and the ancient archetype of chivalry. It may be you or your client is on a quest for a higher cause.

I hope you have enjoyed these thoughts on the armor symbolic meanings in the Tarot.