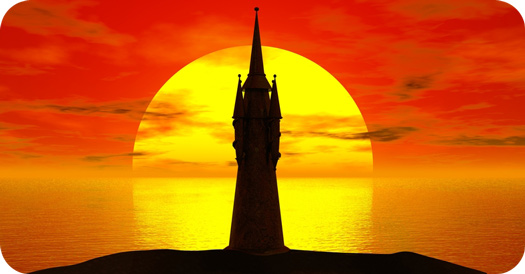 Regarding the Tarot Tower card meaning in mythology, I like to think of the ancient myth of Daedalus. You know…the one with the Minotaur! I’m reminded of this myth when the Tower card comes calling.

King Minos commissioned Daedalus (who was sort of a DaVinci-genius-dude) to create a magnificently ornate labyrinth to contain his “pet beast”, the minotaur. Daedalus did so, and the result was a confounding complex of mazes built in a looming tower. This tower was so puzzling, that it was impossible for the minotaur to escape – precisely what the King wanted.

However, the King also imprisoned Daedalus and his son, Icarus, to the tower because he didn’t want Daedalus to reveal the tower’s secret exit to anyone.

Imagine being imprisoned with the most horrible blood thirsty beast! Of course, it’s an analogy – all humans at some point find themselves trapped with their own inner monsters.

The myth continues to offer clarity about the Tower card when the flames of the tower make their way to my awareness. Daedalus eventually DID manage to escape (uneaten by the minotaur) with his son. But, the tower was built on a deserted island. That’s where the story of Icarus comes in.

Daedalus crafted wings of feathers and beeswax to fly himself and his son off the island. He admonished his son not to fly too high to the sun, as it would melt the wings, catch fire to the feathers, and he would fall to his death. Icarus, not being the brightest bulb in the box, left his father’s words unheeded, and we all know what happens next. Crash and burn.

What most people don’t know is the back-story. A few years before the King commissioned him to build the minotaur’s prison, Daedalus murdered his own nephew, Talos. Daedalus saw in his nephew talents and skills and intelligence that his son Icarus would never have. Talos was an ingenious young lad, and everything Icarus was not.

Some interpretations of the myth say Daedalus pushed Talos off his rooftop to his death because he could not bear the pain of having a dunce of a son in the light of Talos’ genius. Other versions say Daedalus feared competition from young Talos. Whatever his motives…murder never wins. And so, the fates took vengeance…an eye for an eye and all that…the life of Daedalus’ son in exchange for the Talos’ life taken.

So, to tie this mythic back-story in with the Tarot Tower card meaning, we could boil the narrative down to say something like: “Our actions build up, brick-by-brick. Misdirected actions can lead to labyrinthine life paths, causing us some wicked twists and turns in life. What’s worse, if we are not mindful of our intent, thought and action, the buildup could lead to a potential demolition in our lives.”

At least, that’s my take on the mythological support etched into the Tarot Tower card. It speaks to me how guilt of past wrong doings – or torment from past events – can turn in the labyrinth of our minds – only to eventually “come to a boiling head” and manifest in crumbling endings. To sum up, the Tower reminds me of choices we all make, and how we must to take responsibility for our actions. Consequences add up…brick by brick…and it’s in our power to face up to our actions – come clean – before painful karma works in our lives to balance the scales.

Sometimes the Biblical story of the Tower of Babel comes up when I pull the Tarot card too. It’s a Biblical myth originating from ancient times as a way to challenge the astrological establishment. As we know, the ancient Sumerians & Babylonians were some of our first and most savvy astrologists. They built impressive towers reaching to the sky to get them closer to the stars. The first observation towers.

Early religious leaders weren’t too keen on this, believing that there should be no other form of divine wisdom outside of Christianity. In the Biblical story, ancient humans built the tower as a means to “become as high and powerful as God” and God smote the tower to put folks back “in their proper place.” It was written, presumably, that God also encrypted the languages of mankind after destroying the tower. The story is a parable about getting too big for our britches.

But really, there’s so much more to it. Here’s the Wiki on the Tower of Babel…I bet you’ll find it fascinating: Wiki on Tower of Babel

These are just a few thoughts on the mythological back-story about the Tarot Tower card meaning. Hope you enjoyed it! Don’t miss my initial entry on Tower card symbolism here.