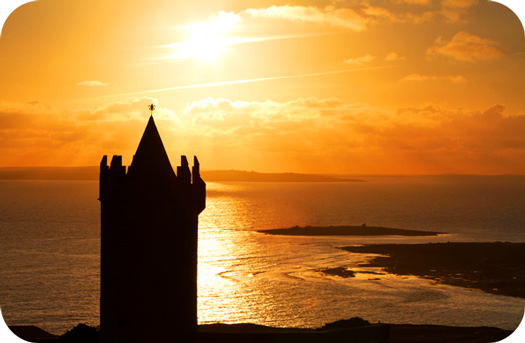 At its simplest, the castle Tarot symbol represents a goal – an ideal of achievement usually after a long quest. How do I come up with this simplified symbolism? A look at all the Rider-Waite cards featuring the castle reveals almost all of them are set in the background of the card. Far off into the distance we see the glimmer of the castle as a tribute of what awaits us after we have been upon a quest for higher knowing or advancement.

In almost every card the castle looms far in the distance from the central character of the card – it’s a reminder of our reward (and delayed gratification). Whether it be monetary, spiritual, romantic, or otherwise, the castle is an end-result of the investment made on the journey of life. And, even where it is featured prominently (in the seven of cups), the castle still hints to goal-oriented focus.

In the Seven of Cups the castle is an option to be chosen, but what kind of option? This is where we can expand our intuitive ideas about the castle as a Tarot symbol. This is a very good thing because a broader view of castles makes us realize they are symbolic of far more than just obtaining a goal.

In the final analysis a castle is a home, and in their golden era in history the castle was a grandiose symbol of protection. Everyone took shelter within the thick stone walls of the castle – from royalty to cattle – all sought refuge within the fortress.

So, when the castles of the Tarot cards come calling out to your awareness, consider all these potential symbolic meanings in conjunction with the rest of the cards in your spread.

Give pause and allow your intuition a chance to roam the halls of the castles in your own understanding to gain a broader perspective of this intriguing Tarot symbol.

Tarot Symbols
Ankh Symbol Meaning in Tarot
Symbols of the Tarot
Symbol Meanings of Tarot: L-R
Globe Meaning in Tarot
Symbol Meaning of Tarot: D-K
TarotTeachings.com is a trusted Etsy affiliate & Amazon Associate. As such, the website features sponsored products for Amazon or Etsy. Should you make an Amazon or Etsy purchase from a link on this website, TarotTeachings may receive a small commission. Thank you for your purchases, as it contributes to keeping this website online and running. See my policy page for more information.