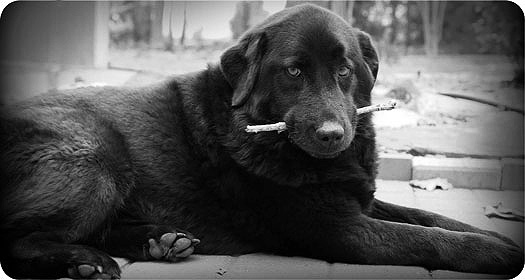 Thankfully, dog symbolism in Tarot does not deviate from its focus meaning from setting to setting. Whether we have close-encounters of the canine kind in the Tarot, or in our neighbor’s back yard – dog symbolism is consistent across all experiences.

This is a good thing because dogs are auspicious beacons in our awareness – not only for their general likeability but also for their dominant behaviors which cue us into deeper waves of symbolism.

When canines of all kinds bark out at our perception in the Tarot, it’s a sign of:

Dog symbolism in Tarot (and otherwise) is mammoth in themes of communication, friendship and community. Why? Because dogs are consummate communicators within their highly evolved societies. In the scenery of the Moon and Fool card we can focus on our ideals of communication by asking ourselves:

Keywords for Dog Symbolism in Tarot

Dogs also represent protection in the Tarot. When the canine clan comes calling on your awareness in the Tarot, consider your ideals about preservation, survival and protection. I’m not sure I jive with the concept of being protected from stuff – but I certainly like the idea of having a guardian-protector at my side (just in case :).

Dogs are legendary throughout countless cultures (ancient and otherwise) for protecting their treasure. When domesticated, dogs treasure is their human pack – and (generally speaking) dogs will vehemently guard their people. Same holds true for feral canines. Their kin is the object of ferocious protection. –Just something to consider when the dogs come running through your consciousness in the Tarot.

Maybe you can even use the dogs you see in the Moon, Fool and other artistic deck renditions to serve as a launching pad. Meaning, when those dogs bay in your awareness, suck them into your dreaming mind. Conjure a canine silhouette upon the shades of your imagination. Invoke the dog as your keeper, communicator, guardian and guide. Who knows, doing so may just land you in a spirit-journey that may be utterly transformative for you.

I hope you’ve enjoyed these ideas about dog symbolism in the Tarot.

Cozy up to canine concepts by dreaming into the cards in which they are featured (Rider-Waite):