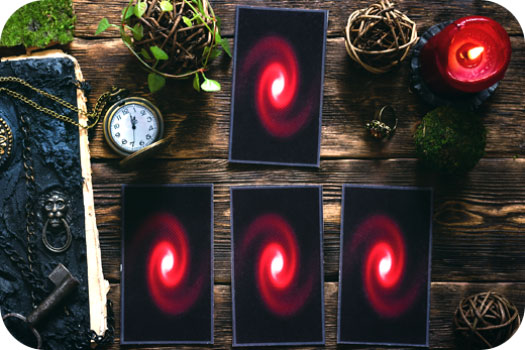 How to Read Tarot Time

This page on how to read Tarot time comes from the FAQ Files, and is a response to several questions I’ve gotten about how we can determine the timing of an event seen in a Tarot reading.

I get uber “out there” when it comes to the concept of time because it’s a giant “blue pill” (to reference the Matrix movie), topic leading to endless and slippery implications.

Namely, time is not linear, so slapping down a Tarot card to nail down a time frame is, well, kind of absurd.

It is, according to quantum logic, impossible because the variables are stacked against the timely outcome of one prediction.

That’s not to say we can’t get an idea of timing in our Tarot spreads.

This article deals with understanding how to read Tarot time in “ball-park” terms (broader time frames).

Note: Seeing time through Tarot eyes requires us to realize our fates are determined upon thought, action and belief. These are some of the infinite variables prohibiting pin-point accuracy in time prediction.

Starting with basic foundations, we can look to the suits of the cards for help in determining the season in which events are taking place within the Tarot reading:

Seasons of the Suits:

Check out more about symbolic meaning of seasons here.

How did I come up with these seasonal associations for the suits? There’s a big answer involving tons of observations on diverse systems of thought and philosophy. A small answer: Pulling one string of perennial wisdom affects the whole tapestry – but you’re still connected to that one string. I pulled a lot of strings to come up with the seasonal correspondences of the suits, and they all kept pointing to the same answers.

Not only are these correspondences logical for me, they’re also intuitive matches to esoteric systems of thought such as astrology, I Ching, alchemy, sympathetic magic, and other forms of ancient wisdom.

Looking at the other correspondences with this chart might make more sense if we’re hung up on the associations.

Numerological Time Clues:
The numbers in your Tarot reading may give you some ideas as to a broad time frame of events. Before a reading (particularly if your reading is time-focused) establish a system for determining chronological time.

If you’re pulling Tarot aces in a reading, these would represent the month of January.

Cards extending beyond the 12th month (December) could represent days within months. The World card for example could represent the 21st day within the month indicated by an adjacent card in your spread.

Astrological Time Clues:
There are so many Tarot decks on the market – one for every taste and preference. Many decks have astrological illustrations on the cards that may help with time interpretation.

For example, I often use the Gilded Tarot in time-focused readings because of its astrological details.

Most decks, even if not astrologically focused, still hold to traditional symbolism and you can glean astrological data from this original symbology.

Take the Emperor card. Traditionally, there is some kind of ram, or rams’ horns depicted in the card. It’s because the Emperor is associated with Aries. And, Aries is a time indicator of early spring months (March 20 – April 19) in the Western hemisphere.

Walk through your major arcana cards, and see if you can pick out the astrological clues for each card (a Rider-Waite based deck might be best for this exercise).

You can also check out my astrological associations for Tarot chart here.

Designing a Time-Focused Tarot Spread:
Perhaps the simplest route in how to read Tarot time is to design your own spread. Assign specific time slots for each placement in your spread. Be broad with the placement, and look to the card for more specific time data.

Here’s a “How to read Tarot time” spread and layout sample:

Of course, this is just an example of a Tarot layout. You can design your own specialized spreads to help you clearly define a period of time.

Using Intuition to Determine Time:
The best tip for last really should have been the first on this list for how to read Tarot time.

The best way to tell time by Tarot is to read with the keener perception that indwells you. You have layers of perception within you that defy all logic. When your reading in the waves of energy – you can surf through the variables of time and glean some outstanding predictions.

The Tarot can trigger the sojourn of your intuitive layers of perception, but it’s the indwelling depth within you that surfaces with profound meaning.

What do I mean by “indwelling?” It’s the Watcher Within. That presence that knows all and is all. It’s a vast subject in need of its own platform for explanation, but if you’re into the divinatory arts for authentic purposes, odds are you know exactly what I’m talking about.

Consult the Watcher Within in an unfocused, easy way as you cast yourself over a Tarot spread. Be open and natural about it. Letting the Watcher do the work is like casting out a fishing line. Just cast out, and let the Watcher catch the big fish (in this case, clear time frames in a Tarot reading).

I hope you have enjoyed these thoughts about how to read Tarot time.

Card Order in Tarot Spread
Eight of Wands Meaning
Differences Between Tarot and Oracle Cards
History of Tarot Cards
High Priestess Card in a Reading
Tarot Number Quick Reference
TarotTeachings.com is a trusted Etsy affiliate & Amazon Associate. As such, the website features sponsored products for Amazon or Etsy. Should you make an Amazon or Etsy purchase from a link on this website, TarotTeachings may receive a small commission. Thank you for your purchases, as it contributes to keeping this website online and running. See my policy page for more information.