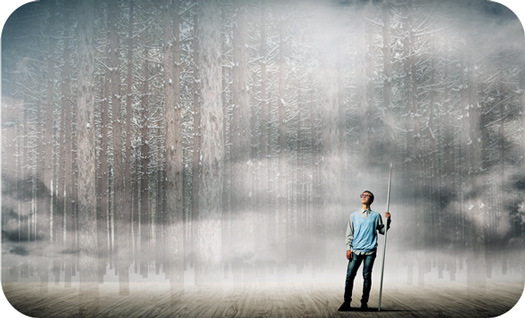 About Nine of Swords
Meaning in Tarot

I appreciate how the Morgan-Greer deck repeats its imagery in this card, and the six of wands (click here for the Morgan-Greer of 6 and 9 of rods image comparison). We observe the same rider, only now in the nine of wands he is older (a full grown beard) and wiser; a seasoned veteran back from the fields conflict.

The nine of wands has a stoic, stern quality to it. The set jaw of our hero denotes a true grit lacking in the previous cards. The bandages indicate the wounds of hard knocks; the brow is beaten, but the hero is certainly far from defeated.

On the contrary, our figure is stalwart and determined in his last stand to defend his freedom of creative expression. The erect rods at his back symbolize his virtuous ideals have held strong and true. They may also symbolize his supporters who have stood behind him through the battles along the way. Further, those rods indicate an impenetrable force of standards and a level of integrity that will not allow corruption.

Still standing on higher ground, our hero also finds himself on a smooth, steady foundation. No emotional overreacting, and no question as to his objective. No more diverging thoughts, and no more short cuts. Our figure been down that road and has no further need for the tang of disappointment that route offers.

Moreover, this card indicates power in solidarity (of thought and community). When we see the nine of wands in our readings we’ve committed to our cause and are prepared to honor it with remarkable courage. At this point, we’ve invested mammoth amounts of energy in our dreams and our self-development, there is no retreating now.

The flames of the wands (i.e., our burning desires) have been lit, flickered, faltered, extinguished and are now rekindled – blazing with more ferocity than ever before.

I particularly appreciate how our hero is facing east in the card. Iconically, eastward directions salute new beginnings as the dawn of a new day rises with the sun (in western symbology). The east is also and is associated with the grounded nature of the Taurus in astrological symbolism.

These references reinforce a renewed determination in wherewithal and wit. Also pay attention to the other cards in the spread. You will notice our nine of wands hero might be looking eastwardly to another card that may lend more meaning to the reading.

In the journey of wands, a cause was taken up with youthful verve. Winding to the end of our journey we have become a dauntless patriot, staunch in our firm believe that we shall surpass all odds to drive our cause to its conclusion.

Some stalwart symbols in the nine of wands Tarot card meaning:

Armor: Only in certain deck versions (like the Morgan-Greer shown in the center of the card trio above), the symbolic meanings of armor deal with protection, preparation, and strength. Most Tarot deck renditions depict all the knights in full armor (knights typically represents action and strength). The armor indicates a need to protect ourselves when engaging in activities referenced in a reading. Get more about armor meaning in Tarot here.

Persistent questions the nine of wands asks us:

Symbols of the Tarot
Moon Signs in Tarot
Sun Tarot Card Meanings
Devil Tarot Card Meanings
Dream Meaning and Tarot
Medicine Wheel and Tarot Suits
TarotTeachings.com is a trusted Etsy affiliate & Amazon Associate. As such, the website features sponsored products for Amazon or Etsy. Should you make an Amazon or Etsy purchase from a link on this website, TarotTeachings may receive a small commission. Thank you for your purchases, as it contributes to keeping this website online and running. See my policy page for more information.