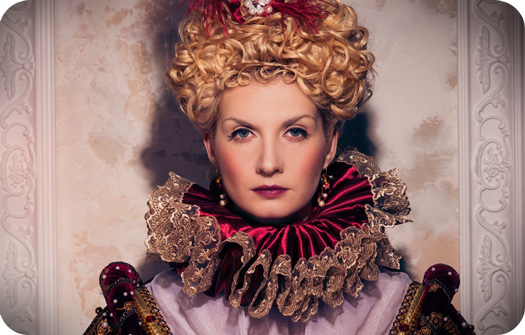 Tarot meaning of Queens is similar to King meanings. Queens are just as commanding, authoritative, and strikingly intense in their ruling authority as Kings.

However, there is one massive departure in queen persona: One) She is feminine, and therefore subtle in her reign.

The Tarot meaning of queens deals with:

To be sure, the Queen is very much in control. She is the matriarch and it is her way or the highway. But, her mannerisms and focus are 180 degrees from the king.

Consider Yin and Yang energies. Where the King is yang (male, action-oriented, assertive), the Queen is his opposite and complementary partner (female, passive, surreptitious in accomplishing)

That said, further queenly qualities take on more meaning according to the “queendom” (the queens domain or suit) in which the queen resides.

The queendom of cups deals with matters of the emotion, intuition and feelings. So, when we pull the queen of cups she will softly speak to our emotions in the matters of the heart.

The queendom of pentacles is a material world dealing with work, money, home and health. The queen of pentacles will fastidiously appeal to us with her shrewd domestic and business sense.

The queendom of swords challenges points to the balance of our thoughts, mental challenges were faced with and effective communication. The queen of swords will put a sharp edge of clarity in our minds about how we can effectively deal with conflicts.

The queendom of wands caters to our awareness of spirituality, inspiration and social settings. Ergo, the queen of wands will be the belle of the ball, socializing with us about deeper personal connections, intuiting spiritual connections and she will conjure our creative juices to flow.

Tarot Meaning of Queens as a Person:

Pulling a queen in your Tarot reading can represent a specific person in your life. This will be an adult female (living or physically deceased) who has major influence in your life. As queens are known to do, she may be manipulative and cunning in her methods of dealing with you. On a positive spin, this noblewoman typically cares very deeply for you, and the motivations behind her behavior are prompted by a deep need to nurture, guide protect, and love you.

Queens in a reading can be our mothers, grandmothers, female mentors (such as teachers or counselors). They will be women in positions of authority, so they could also represent our employers, supervisors, and superiors.

How to Deal with Your Queens:

Now that we know more about Tarot meaning of queens, we know we’re dealing with an intensely strong personality. Depending on the suit in which the queen is pulled, we become better equipped to communicate with this person the queen card represents.

For example, a reading with a client revealed the Queen of Swords, whom I identified as my client’s boss. Surrounding cards indicated she was a taskmaster, with incredibly high standards.

She was giving my client a devil of a time concerning a major account. His treatment of this big account would determine the decision of promotion in title and salary. The problem was that his boss was so critical, it seemed my client could never satisfy her.

However, I encouraged him to step into her slippers. I asked him to be the Queen of Swords, and experience what it feels like to be in charge of every minute detail, reign regally over an entire kingdom, and STILL have the presence of mind to keep your poise and composure – my client’s perspective was drastically transformed.

He took this reading a step further, and began to see his boss AS the Queen of Swords. And so, he started treating her with more respect and became more compassionate to the overwhelming responsibilities of her charge.

He also recognized the Queen of Swords demands precision, analyzation, strategy and is a stickler for perfection. Keeping this in mind, he began to treat that big account like it was a military operation – neat, tidy, every “i” dotted, every “t” crossed, everything in perfect, pristine order.

His boss noticed. She appreciated the changes, and he got the promotion. No, he didn’t kiss her ass (as a Queen of Swords personality type, his boss would have seen right through that ruse, and he would have paid through the nose for it). He simply got an inside look into the inner gears of his boss – that’s how profoundly helpful knowing the Queen archetypes can be.

Knowing the Tarot Queen When you See Her:

I’ve seen well intentioned sources offering physical characteristics of queens in the cards, and I include a paragraph about physical traits of each queen in the individual cards (links below).

You’re going to know because when you pull the queen you will be forced to consider that which supports you.

Simplify your reading by asking yourself these questions when the Queen pays you a visit in the cards:

I hope you have enjoyed this page on Tarot meaning of queens.

Click these links below to explore each queenly personality:
Queen of Cups / Queen of Pentacles / Queen of Swords / Queen of Wands /

Knight of Pentacles Meaning
Court Card Meanings in Tarot
Tarot Meaning of Pages
Page of Swords Meaning
King of Cups Meaning
Queen of Swords Meaning
TarotTeachings.com is a trusted Etsy affiliate & Amazon Associate. As such, the website features sponsored products for Amazon or Etsy. Should you make an Amazon or Etsy purchase from a link on this website, TarotTeachings may receive a small commission. Thank you for your purchases, as it contributes to keeping this website online and running. See my policy page for more information.