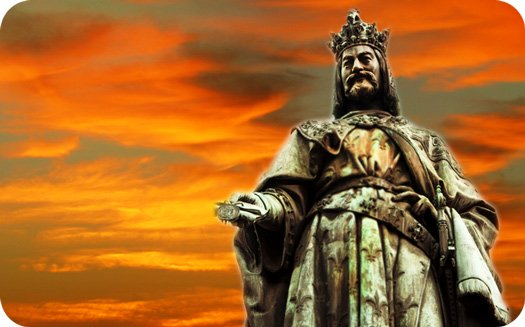 These kingly qualities will take on more meaning according to the kingdom (or suit) the king resides. To be sure, the Tarot meaning of kings deals with standing firm and powerful within one’s own territory. These king cards also represent others in power, ownership, and command.

The kingdom of cups deals with matters of the heart, emotion, intuition, love, and feeling. Appropriately, when we pull the king of cups it will speak to us with authority in these matters.

The kingdom of pentacles is a material world dealing with money, vocation, home and health. The king of pentacles will offer us sage advice regarding these areas of our lives.

The kingdom of swords challenges us to duel with our intellect, strategy, communication, thoughts and mental pursuits. The king of swords will put a point to the status of our mind and ask us to sharpen the blade of our thoughts.

The kingdom of wands waves magic to our awareness and deals with creativity, spirituality, inspiration, and social connections. Ergo, the king of wands will knowingly guide you in these areas.

The Tarot meaning of kings deals with:

Tarot Meaning of Kings as a Person:

Pulling a king in your Tarot reading can represent a person in your life. This will be an adult male (living or physically deceased) who has major influence in your life. As kings will do, this man may dominate, control or even manipulate. On a positive spin, this gentleman could care for you very deeply, and his motivations to guide your actions are spurred by a deep love and need for your safekeeping.

Kings in a reading can be our fathers, grandfathers, male mentors (such as teachers or counselors). They will be men in positions of authority, so they could also represent our employers, supervisors, and superiors.

How to Deal with Your Kings:

Now that we know more about Tarot meaning of kings, we know we’re dealing with an intensely strong personality. Depending on the suit in which the king is pulled, we become better equipped to communicate with this person the king card represents.

For example, I pulled the king of pentacles for a client of mine. The surrounding cards and my client confirmed this was his father (who was still living) and still had a major controlling influence in his life.

My client and I talked about how he could approach his overbearing father so he might ease up on the reigns of control. The personality of the king of pentacles told me my clients’ father was very pragmatic, practical, and systematic. He was an “it is only real if I can touch it” personality and didn’t want any part of his son’s intuitive, spiritual way of life.

Knowing his father was rooted in pentacle (earth-bound, matter-focused) energy, my client was able to communicate with his father from that angle. My client made a plan of action about an venture he needed his father’s approval for. He made a business plan, did the research, and spent weeks investigating the cold hard facts about this venture before approaching his pragmatic father.

This method was quite successful. Much more so than if my client had talked to his dad in an inspired, dreamy way (which, he admits, he’s apt to do – and always got shut down by his pragmatic father as a result).

Knowing the Tarot King When you See Him:

I’ve seen well-intentioned sources offering physical characteristics of kings in the cards, and I include a paragraph about the physical traits of each king in the individual cards (links below).

However, you or your interpreter is going to know the Tarot meaning of the king by the card itself and particularly by the surrounding cards.

You’re going to know because when you pull the king you will be forced to consider that which rules you.

Simplify your reading by asking yourself these questions when the King pays you a visit in the cards:

I hope you have enjoyed this page on Tarot meaning of kings.

Click these links below to explore each kingly personality:
King of Cups / King of Pentacles / King of Swords / King of Wands