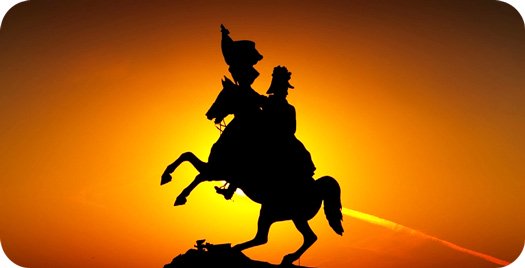 I studied the royal hierarchy of aristocracy when I first approached the Tarot because I thought it would round-out my experience with the Royal Arcana. I’m glad I did some practical research because it really illuminated some clear highlights of the Tarot meaning of knights.

And it did, but the thing that most helped me translate Tarot meaning of Knights was a simple game of chess.

More than any other piece, the Knight has an unusual but extremely clever range of movement on the chessboard. The knight chess piece (as Knights in tarot) is strategically moved to the center of the board – where all the action is. Its usefulness is dimmed when on the outside because it’s unusual mobility is limited.

The Tarot meaning of knights deals with:

It’s the mobility of the knight (in chess and otherwise) that most intrigues me. In chess, the knight has a unique side-swiping movement (and “L” move), unlike any other piece, and can deal some impressive damage to an opponent.

The same holds true with the Tarot meaning of Knights. These cards are archetypal of motion. These are the personalities who carry out the task of battle on the front lines. They are the right arm of the law for the kingdom. They facilitate law, order, and execution.

Knights are about forward motion, high spirit, drive, determination and almost wreck less demand for compliance. Knights need their environment to bow to their will. They aren’t quite mature enough to know not everything crumples to the application of force.

Kings know this, and that’s why they’re kings. Queens know how to make situations and people yield to her will too, but she certainly does not use force as the Knight does.

There are scholars who attribute the Biblical four horses to the four suits of Knights. I’ve seen different renditions, but my favorite is from The Complete New Tarot written by Onno Docters van Leeuwen and Rob Docters van Leeuwen (an all-time favorite Tarot reference of mine. Found it in a bargain bin at a discount store of all places!).

Docters van Leeuwen designate the four horsemen as such:

Whether we can find further Tarot meaning of Knights by associating the with the four revelatory horsemen or not, the fact remains, the role of the horse is part and parcel with the Knight persona.

The horse in the knight cards speaks to us about strength, ignition, and mobility.

Further meanings of the knight will be wrought from the suit within which he lives.

The realm of cups deals with matters of the emotion, intuition and feelings. So, when we pull the knight of cups we’re conquering the heart, and charging matters of love head-on.

The domain of pentacles is a material world dealing with work, money, home and health. The knight of pentacles will auger strategy and demand battle plans drawn in matters of financial planning and home life.

The area of swords challenges points to the balance of our thoughts, mental challenges were faced with and effective communication. The knight of swords is in his element, battling the daily conflict of the mind, executing (sometimes harshly) belief systems that do disservice to the kingdom (the whole Self).

The land of wands caters to our awareness of spirituality, inspiration and social settings. Ergo, the knight of wands struggles to find temperance between his hot-blooded nature and his philosophical, creative urges.

Tarot Meaning of Knights as a Person:

Pulling a knight in your Tarot reading can represent a specific person in your life. This will be an younger male (living or physically deceased) or even a boyish female…but to be sure, the male principal is strong in this person. This person will be a driving force in your life. The one who is always urging you forward, encouraging progress, strategizing for promotion.

As knights are known to do, they can be extremely pushy and sometimes brash. But, often their ways are well intended. We get a “big brotherly” feel here sometimes, and their actions (although sometimes way overdramatized) usually boil down to the “Knight in Shining Armor” persona shining through. In essence, this person is just trying to protect and serve.

Knights in a reading can be anybody in our life, really. They are often seen in our brothers, sons, co-workers. My experience has overwhelmingly revealed Tarot Knights as representatives of men who serve(d) in the military. Again, these people could be female, but these women will have remarkable strength, with typical feminine softness drastically downplayed.

How to Deal with Your Knights:

Now that we know more about Tarot meaning of knights, we know we’re dealing with a driven personality. Depending on the suit in which the knight is pulled, we become better equipped to communicate with this person the knight card represents.

I’ve seen well-intentioned sources offering physical characteristics of knights in the cards, and I include a paragraph about the physical traits of each Knight in the individual cards (links below).

You’re going to know because when you pull the knight you will be forced to consider that which launches you to action.

Simplify your reading by asking yourself these questions when the Knight pays you a visit in the cards:

I hope you have enjoyed this page on Tarot meaning of knights.