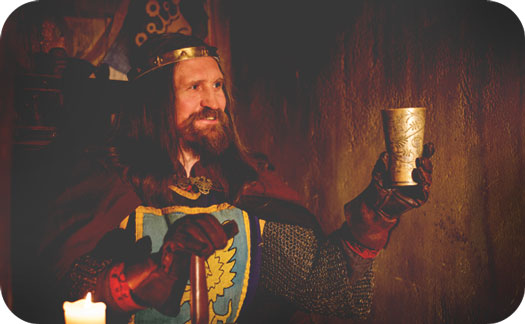 About King of Cups
Meaning in Tarot

What would the king of cups say to you over a round of drinks? Here are some ideas. As you read through, imagine this king talking directly to you and sharing his personality with you over a brew.

The King of Cups – In His Own Words…

“I am the King of Cups and this is my legacy.

I am a consummate communicator, and I built my kingdom on a foundation of intelligent discernment. A natural humanitarian, I can easily relate to people of all classes and races.

Some keywords from the King of Cups:

This ability to relate and understand people comes from an uncanny ability to listen. I’ve been told I have a fatherly way about me in that people are comfortable in telling me their life story. This speaks volumes, as a man of my high stature can be very intimidating. Nevertheless, they open their hearts to me, and I value the candor and trust they place in me.

My forte in verbal exchange enables me to be a true diplomat too. I am most effective as an ambassador for my kingdom. I am the most traveled of all the kings in the Tarot. I enjoy travel, but most favorable is joining forces with foreign lands.

Learning ways of foreign cultures is highly engaging for me. Indeed, I carry many foreign customs back to my home country with a goal to diversify my own people. I believe in broadening minds and expanding horizons.

To wit, I establish higher learning in my kingdom. I endorse educational programs and encourage everyone (men, women and children) to participate in continued learning.

I am also a religious man, and as the King of Cups, I promote spiritual education too. I believe everyone should have an equal sampling of religion, science and philosophy. I work very hard to make these things available to every one no matter what their economic status.

My suit is water, so I am emotionally intuitive, yet my station as King is air-bound which dwells in the realm of thought. This gives me an advanced edge because I can effortlessly communicate the intuitive perceptions I receive.

I am an eloquent speaker, writer and I even express my philosophical perspectives in art too. Although, I am not in a position to nurture my artistic side as much as I would desire. More appropriately, I devote much attention to studying fine arts. I have a savvy eye for classic design, art, and style. I promote many arts programs in my kingdom too.

I sit on a foundational throne in the center of the ocean, which gives testimony to my exclusivity in communicative, intuitive realms. Further, my stone island in the sea is symbolic of my solid rock ability to discriminate the truth from the babble that is uttered from the collective consciousness.

As the King of Cups, I am psychically perceptive and can hear all kinds of verbiage. I sit on a foundation of keen intellect and strong-willed determination to trust intellect over unreliable sources.

Arthurian lore draws a connection to me, the King of Cups, and the Fisher King. Indeed, my son, the Knight of Cups has likened to Perceval whom the Fisher King engages in the story of the quest for the Holy Grail. I can see where similarities can be drawn.

The most important connection with this legend and myself is that I do protect something unfathomably priceless. The grail as it is manifested in my wife, the Queen of Cups. She is my highest advisor, more psychic than anyone in my realm. I trust her implicitly, she is my secret weapon and foretells of many an event. She is the grail of life and the connection to all things unseen. I devote my life first to my Queen, then to my kingdom.

I’m fastidious about my appearance. As a diplomat, it’s important for the King of Cups to maintain a polished appearance. I have brownish hair, cut short, and well-tended. My eyes are most noted for their crispness more than color, but they are light and bluish like the seas of my homeland. There is something about my presence that is authoritative. I hold myself as if I am always in control. This is a quality that goes beyond the realm of kingship.

When I appear to you in the cards, I will encourage you to be a leader, to be the voice of your own people. But I will tell you in order to be a strong voice in a sea of opinions, you must first listen to the people’s needs. Let both intellect, compassion, and intuition be your guide as you serve as an ambassador for the greatest good of your tribe.

The King of Cups.”

Some symbols from the King of Cups:

Fish: It is no coincidence that the fish is featured on all the cups court cards because fish symbol meanings deal with emotion, intuition and creativity. When considering the fish symbol meaning, we must first recognize the nature of the water in which it lives: in motion, unpredictable, and representative of the subconscious (as symbolic of water). The fish is a symbol of prolific abundance if we have the wherewithal to harness our own passion responsibly. Swim in fish symbolism of the Tarot sea.

Ocean: Ocean symbol meanings deal with infinite possibilities. Consider the ocean, and you will be considering the essence of vastness, mystery, and depth. It seems inexhaustible and the holder of wondrous things unseen. When the oceans in the King of Cups crash their waves against our consciousness, it is time to pay homage to the great divine – meaning we should recognize the burgeoning power around us, the animating force that runs through us – the expansive and expressive nature of the universe. In other words, we must acknowledge that there may be other (higher) powers at work in our lives and it may be time to release our control in order to allow these powers to open up incredible opportunities to us. Get more about the symbolic meaning of water here.

Ship: Yes, of course, ship symbol meanings deal with travel and journeying. However a commonly overlooked factor is the medium upon which they said – water – it deals with the deeper levels of the psyche and the subconscious. This is particularly the case with the King of Cups. When Ships sail across your vision in a reading, take into consideration where your thoughts (psyche) are traveling – what kind of baggage (cargo) are you carrying around, and are you charting (navigating) out the best course for your thoughts and emotions?

Some questions the King of Cups asks:

Knight of Pentacles Meaning
Court Card Meanings in Tarot
King of Pentacles Meaning
Understanding Tarot Court Cards
Tarot Kings as Father as Father Figures
King of Wands Meaning
TarotTeachings.com is a trusted Etsy affiliate & Amazon Associate. As such, the website features sponsored products for Amazon or Etsy. Should you make an Amazon or Etsy purchase from a link on this website, TarotTeachings may receive a small commission. Thank you for your purchases, as it contributes to keeping this website online and running. See my policy page for more information.