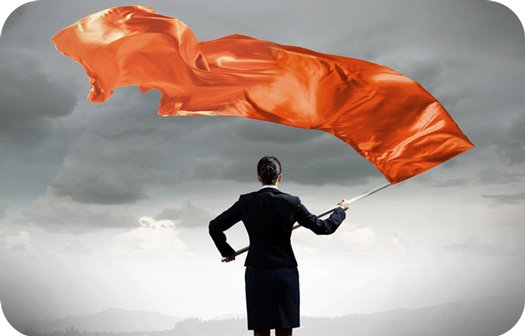 What do flags do? They signal. Announce. Proclaim. They wave and snap in our vision as an unmistakable proclamation. What’s the message? It depends on the flag…but this article on symbolic flag meaning in Tarot highlights some valid points to recognize when we see flags flying in our readings.

We see the flag flailing most obviously in the Tarot through the windows of the Death, Sun and Judgment cards. A fitting trinity. Feels like a resurrection-esque to me. Take a moment to look at these three cards, and you might get the same impression: An announcement of revolutionary transition.

I think that’s why the flags of the Tarot of flying high. I think they signal the evolution of the human soul. I think they flag down the victory of human’s victory over limitation and captivities of all kind.

Flag meaning in the Tarot asks these questions:

Consider the flag meaning in the Death card. Traditionally, it’s a black flag with a white segmented rose. Usually the rose is shown with five segments. It’s a standardized icon seen in Arthurian, Rosicrucian, Alchemical and Golden Dawn circles to name a few. The five petals announce natural order. White is symbolic of purification. You can take a look at Rose symbolism in Tarot, but this flag in the Death card waves meanings of the natural cycles of life, rebirth, evolution.

Keywords for Flag Meaning in Tarot

The red flag waving in the Sun card signals a time of vitality. The child reborn proclaims freedom of self-expression and the flag is a symbol of the importance of being consumed by the warmth of enthusiasm. The flag in this card is a tribute to life reclaimed.

The equal-armed cross in the Judgment card announces restored balance. The equal-armed cross is symbolic of the foundational pillars of cosmic order: The cardinal direction, the four elements, the four observable stages of life (birth, childhood, adulthood, death) and the completion of a cycle therein. These are just a few representations the cross represents.

The red of the cross (in the Rider-Waite version) is symbolic of sacrifice (of a spiritual Christly-kind, and/or the marks we endure as we daily give ourselves over to the life-exchanging process of existence). The white background of the flag is a promise of our cleanliness through this exchange – purity. (see also, Color Meanings in Tarot here)

When the flags of the Tarot raise the pole of your awareness, take some time to consider your announcements (to yourself and the world around you).

Tarot Symbols for Decision Making
Bench Meaning in Tarot
Tarot Symbols: Bridge Meaning
Symbols of the Tarot
Angel Tarot Symbols
Chain Symbolism in Tarot
TarotTeachings.com is a trusted Etsy affiliate & Amazon Associate. As such, the website features sponsored products for Amazon or Etsy. Should you make an Amazon or Etsy purchase from a link on this website, TarotTeachings may receive a small commission. Thank you for your purchases, as it contributes to keeping this website online and running. See my policy page for more information.