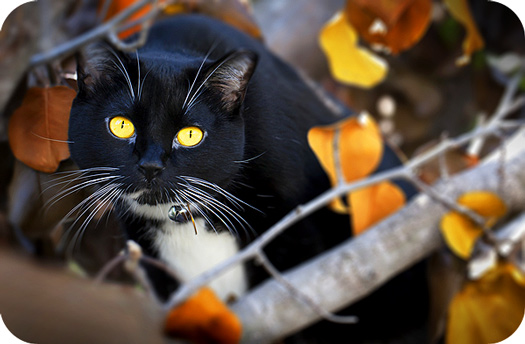 When thinking about cat symbolism in Tarot, it’s a good idea to remember the cat plays its role on stage with the Queen of Wands. With this in mind, we can think about the relationship between the cat and Wand Queen to derive powerful meanings.

For example, cat symbolism in connection with the Queen and suit of Wands deal with:

Keywords for Cat Symbolism in Tarot

Looking through this list of symbolic meanings, we can easily apply any of these attributes to both the Wand Queen and the cat with which she keeps company.

Cat symbolism in Tarot, in my view, honors the mystery inherent in the cards. For untold centuries the cat has stood nobly as a symbol of aloofness – a savvy keeper of secrets. Cats have long been viewed as vessels of magical power, never revealing their motives (does anybody really have any idea what motivates the feline to some of its antics!?!).

This calm, cool exterior bleeds over into the Tarot to convey a sleek mood of secretiveness and obscurity. The cat is an ultimate authority of its own inner realms. It needs no permission to behave in one way or another – therefore the cat must be given full reign to rule as it sees fit.

On the whole, the Wand Queen is a bright, extroverted energy. So, the presence of the black cat can be an enigma when interpreting. In short, that paradox is symbolic of not giving away all our secrets. Everybody has secrets, and the wisest among us know when to share, and when to keep our secrets to ourselves.

When the cat comes pitter-pattering into your awareness in the cards, pay attention to the presence of secret knowledge in your midst. Think about information that can be shared, and information that is better served when withheld.

That dark mysterious cat will certainly have a message for you. Perhaps she encourages you to incorporate an air of mystery into your persona. Or, perhaps the queenly feline beckons you to be the queen/king of your own inner knowledge – a reminder that you are the only one in charge of your inner kingdom.

Whatever the message, to be sure cat symbolism in the Tarot is a powerful energy. When it comes up for you, honor it and pay attention to the messages the feline forces have to offer.

Castle Tarot Symbol Meaning
Blindfold Symbolic Meanings in Tarot
Symbol Meanings of Tarot Introduction
Cloud Meaning in Tarot
Symbol Meanings in Tarot A-C
Bull Symbolism in Tarot
TarotTeachings.com is a trusted Etsy affiliate & Amazon Associate. As such, the website features sponsored products for Amazon or Etsy. Should you make an Amazon or Etsy purchase from a link on this website, TarotTeachings may receive a small commission. Thank you for your purchases, as it contributes to keeping this website online and running. See my policy page for more information.