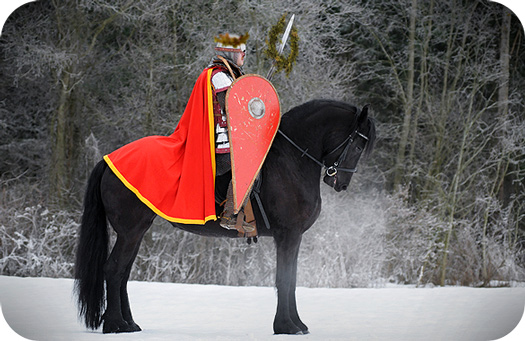 About Four of Wands
Meaning in Tarot

With its bold messages of triumph and victory, the six of wands Tarot card meaning also hints admonishment at losing sight of our vision in the midst of our successes.

Clearly, we’ve ascended the conflicting din expressed in the five of rods, and mounted a sure-footed campaign. Further, that campaign is met with the support from the majority, and the card indicates our cause (along with our confidence) is greatly bolstered as we swagger into our purpose in full pomp and regalia.

Some keywords marching from the six of wands Tarot card meaning:

The six of wands reflects this kind of cocky scenario with its use of specific imagery. I’ll touch on these symbolic images in the symbol section below, but to elaborate:

Am I picking at petty details? Perhaps. And I don’t want to demean the obvious message of triumph in the card. However, these details will come to bear relevance in future cards as we see a possible backfire in the seven of rods.

In short, the six of wands encourages our exuberance as we meet with support and accolades in our creative vision. We’ll just want to be aware of potential diverging thoughts in our readings so we may return our horse back to our “true north” if the occasion merits.

Horse: Featured on all the knight cards of the Tarot, the horse symbol meanings deal with strength, motion, action, and vitality. Linked in many ancient traditions with the four elements (each leg of the horse representing fire, water, earth, air) the horse is also a strong spiritual symbol and an emblem of incorporating all the elements to maintain an equal, powerful balance with all things in the universe. This is evident in the “either/or” nature of the knights. In a more mundane sense, the horse is pre-dispositioned to have a charging nature. In a reading, this gives us pause to consider where we are charging to and why. In the six of wands, we may also be “sitting on our high horse,” placing pride too high on our list of priorities. More about horse symbolism here.

Wreath: Typically wreaths of laurel are depicted on cards suggesting accomplishment or choosing high ideals over trivialities. Wreaths have long been a symbol of victory ever since the first ancient games upon mount Olympus where the victor was crowned in laurels (hence the term “resting on his laurels” comes when one relies on his/her credentials rather than further drive/action). A sweet-smelling laurel wreath is also a symbol of protection, peace, and purification and is associated with the god Apollo. It is a message that the favor of the Gods is upon us and that we shall be the victor in this stage of our lives. More about symbolic wreath meaning here.

Armor: Only in certain deck versions (like the Morgan-Greer shown in the center of the card trio above), the symbolic meanings of armor deal with protection, preparation, and strength. Most Tarot deck renditions depict all the knights in full armor (knights typically represents action and strength). The armor indicates a need to protect ourselves when engaging in activities referenced in a reading. More about armor meaning in Tarot here.

Questions to illuminate our understanding of the six of wands Tarot card meaning:

Six of Swords Meaning
Four of Swords Meaning
Magician Tarot Card Meaning
Reversed Cards
Eight of Wands Meaning
Two of Pentacles Meaning in Tarot
TarotTeachings.com is a trusted Etsy affiliate & Amazon Associate. As such, the website features sponsored products for Amazon or Etsy. Should you make an Amazon or Etsy purchase from a link on this website, TarotTeachings may receive a small commission. Thank you for your purchases, as it contributes to keeping this website online and running. See my policy page for more information.