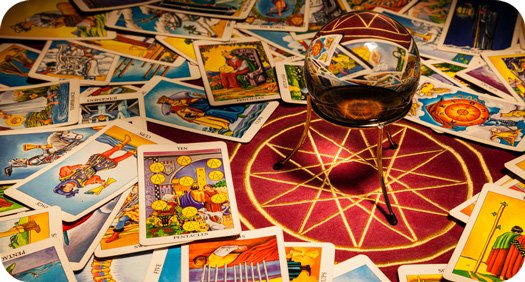 The first step in understanding a tarot deck is to familiarize oneself with the anatomy of the deck itself.

Each full deck is comprised of 78 cards and can be three main categories:

The Major Arcana accounts for the first 22 cards of the Tarot deck. Also referred to as Trumps, Triumphs, Majors, or Keys. Although much emphasis is placed on the Majors, the minor cards also play a vital support role to the Tarot and understanding a tarot deck is dependent upon familiarizing oneself with all the cards (not just one section).

Note: Arcanum is singular, Arcana is plural and the term means “secret.”

Where the Major Arcana cards are thought of as the “power” cards or big players in a reading, the Minor Arcana serve in supportive roles and augment the reading with further insight and detail of circumstances.

Court cards within the Minor Arcana are (referred to as “face cards” in a regular playing deck) the court players within the suit: Kings, Queens, Knights and Pages.

We delve a little deeper in understanding a tarot card deck by further breaking down the Minor Arcana into four suits. The four suits are:

For information on the Tarot card suits, including their association with the seasons, zodiac, playing cards and elements, please follow this link to the Tarot Card Suits and Associations page.

There are seemingly infinite perspectives when it comes to reading Tarot cards of the Minor Arcana. This is partly due to the multitude of symbolism on the cards as well as individual viewer interpretation. Tarot Teachings is devoted to providing you with the most diverse information to assist you on your Tarot path.

This concludes the basic building blocks that create the structure of the tarot deck. Understanding a tarot deck comes fully comes when we make a commitment to the esoteric knowledge contains.

Three of Swords Card Meaning in the Tarot
Four of Swords Meaning
Five of Wands Meaning
How to Read Tarot Time
Tarot and Crystal Meanings
Differences Between Tarot and Oracle Cards
TarotTeachings.com is a trusted Etsy affiliate & Amazon Associate. As such, the website features sponsored products for Amazon or Etsy. Should you make an Amazon or Etsy purchase from a link on this website, TarotTeachings may receive a small commission. Thank you for your purchases, as it contributes to keeping this website online and running. See my policy page for more information.