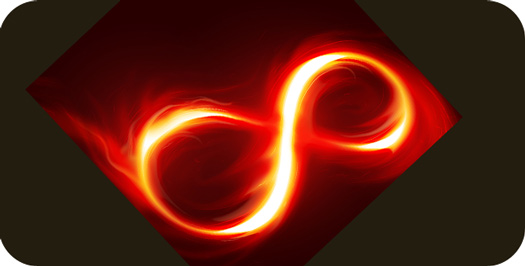 The meaning of eight rolls into our consciousness with the momentum of all the numbers that came before it. We just stepped out of the aspects of structure and perfection in the number seven, and that paved the way for yet another evolution in the magic of numbers.

As an evolved child of structure, the number eight seeks balance with non-structure. Number eight is about cycles, revolutions, and progress gained on the invisible level.

Eights Most obvious symbolic tell is its written Arabic form (“8”). When we recognize is voluptuous curves, we also identify the lemniscate or infinity symbol. This symbol deals with balance, time, and more interestingly, the recycling travel path of energy.

Some questions we may as ourselves to assist in our study of the meaning of eight:

These questions offer a depth to this number, and encourage us to use the number eight in our spiritual practices, meditations, and conscious activities with a goal to tap into that rhythmical, cyclical nature.

One way we can do this is through breathing. Interestingly, number eight has an arithmetic correlation to the letter “H” which is associated with the lungs (because ancient alchemists observed the lungs look rather like an H). Envision the cyclical path of breath moving through your lungs and body in an eight-like (or infinity symbol) pattern. This lulls the munchy (critical) mind, engages the spirit in a softer activity, and thus ignites our deeper selves – flipping on an intuitive switch that turns on depth within us that is both alpha, omega, and Omni. Give it a try, it’s effective and pretty amazing.

As you continue to work with the meaning of eight, consider the following key points related to this number on your journey:

Meaning of Eight in Western numerology and Tarot – a quick reference:

Visually, the meaning of Eight illustrates:

Common associations with the meaning of Eight:

Potential Personality of Eight:
Those who resonate with the vibration of eight are extremely successful – particularly in business where success relies on a period of time that allows progress to unfold. These people see trends and the bigger picture, and are able to ride a wave to their great gain. Conversely, they know when to pull out of engagements too, they have a special sense that gives them insight into the cyclical nature of things. These people are great at games of chance, stock markets, and anything that deals with playing the odds or working with statistics.

Strength card or the Justice card depending on which deck you’re using. Check out other cards that deal with the meaning of eight in Tarot: