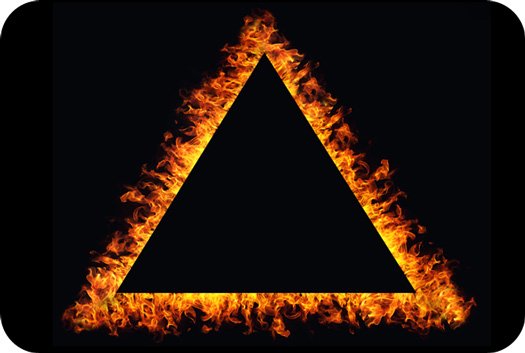 The meaning of Three is about the union of two parts to create a unique whole. That point of union forms the fruit of knowledge -it is our access point to unlimited potential.

It is no accident that all the mystic teachings incorporate the power of three within their folds. Three represents the union of the numbers prior to it (One and Two). Numerologically speaking, if One represents force, and Two represents an opening, then Three is the birthing of true wisdom.

Manly Hall said, “Three is the equilibrium of the unities.” We see this in innumerable forms:

These are just to name a few occurrences of trinities in esoteric culture.

The meaning of Three deals with finding the right mix between the two founding pillars of our life construct. In the cards, we see the meaning of three as a sort of culmination.

We can look to the triangle for assistance here. If we see the process of growth as a triangle, we move up lateral sides to reach the tip, essentially ascending to the top by incorporating our duality. By working together, we find unity. Conversely, we may descend the philosophical triangle in order to reach the source. This is still done by unifying our strongest attributes.

The meaning of Three reminds us we are all connected and it is only through this connection that progress can be made. To further our understanding of Three, we may meditate upon these questions – please keep in mind – these are highly conceptual questions. I’m asking you to think in terms of intangibles rather than solid experience:

Even though Three’s are fantastic tools for structure and order, the energy of Three asks us to loosen our minds – remove ourselves from rigidity and construct in order to fully experience the cosmic nature of what the Three represents.

Three is about creation, and making something astounding out of the resources available. In order to utilize the meaning of Three to do this, it requires a relaxed, playful attitude. Keep this in mind as you review the following meanings.

Meaning of Three in Western numerology and Tarot – a quick reference:

Visually, the meaning of Three illustrates (tipped horizontally too):

Common associations with the meaning of Three:

Potential Personality:
People who resonate with number Three are naturally lucky. They always seem to be in the right place at the right time. They are also opportunistic, and have the ability make good decisions. Three people are highly intuitive and intelligent. Additionally, those with number Three personality traits are highly creative and are excellent communicators. They can be opinionated and manipulative, but they mean well and have the best intentions in most of their undertakings.

Other Articles by Avia on Tarot Teachings