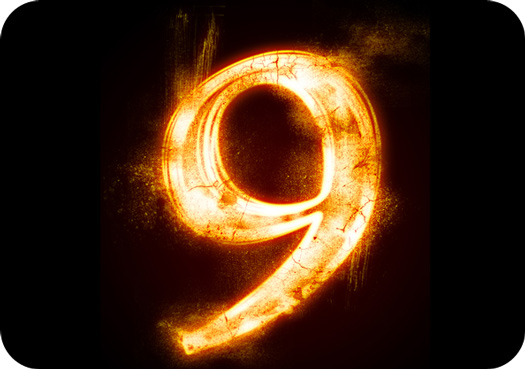 It is fitting that we now come full circle with the meaning of nine. Indeed, even the visual depiction of the Arabic “9” spirals in on itself to indicate the completion of a cycle.

The number nine holds the energy of attainment and completion, but with that closure, we understand we are also faced with renewal. There is no ending without a beginning (indeed the Latin word for nine is novem which shares its root with novus, meaning ‘new’).

I like to call upon the imagery of the alchemical Uroboros when discussing the meaning of nine because of its relation to that concept of completion versus initiation.

Alchemists were also quite keen on movement and behavior of nature, and would often indicate the Uroboros as a conveyance of rebirth and regeneration. Most importantly, this powerful symbol stands for the maxim “one is all.”

The Uroboros and the number nine sets the soul’s intention on fathoming the idea of meeting Ourselves to make a connection and making strides for acceptance (completion) of the endless cycles of life.

Some questions we may ask ourselves that assist in clarifying the meaning of nine:

Undertones of connection and completion rise to the top of our understanding when we consider the nine as a triplication of the ternary triad. Thus, the meaning of nine reflects three realms of experience (in no order):

Nine-energy also solidifies the completion via evolution as evident in adding all of the numbers on our numerological journey through the Tarot: 1+2+3+4+5+6+7+8+9=45 reduced: 4+5=9. Here we would find ourselves right back to the beginning.

Furthermore, multiplication by nine always produces digits that add up to nine; more symbolism of that “all is one” concept – completion/connection.

As you continue to press on to complete your understanding of all the meanings of numbers (in Tarot and otherwise), consider these thoughts on the meaning of nine to bring you the end of your journey (or should I say, the beginning:-).

Meaning of Nine in Western numerology and Tarot – a quick reference:

Visually, the meaning of Nine illustrates (inverted & sideways too):

Common associations with the meaning of Nine:

Potential Personality of Nine:
Those who resonate with nine vibrations are magnetic, charming, and conduct themselves with ease and confidence. They are versed in a myriad of topics and express skills in seemingly countless areas. When given a channel of expression, these people create amazing feats of accomplishment. Nine people are influential, and easily manage groups of people. These individuals are perfect for leadership and places of power when they utilize their nine strengths in a healthy manner.