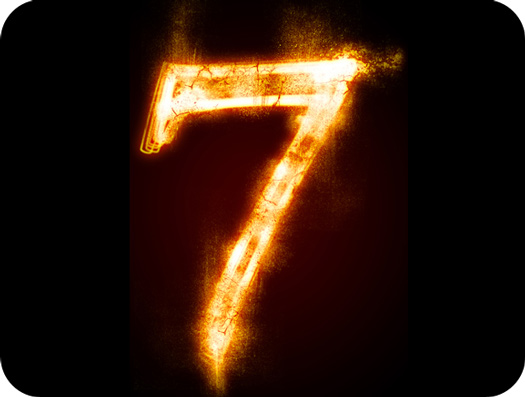 The meaning of seven deals with perfection because we see a specific unfolding in its evolution. As mentioned before, each consecutive number inherits a bit more depth than its predecessor. Seven is the embodiment of all the attributes of each number that existed prior to it. Its association with the initial planets identified by the human senses is an indication of how expansive its vibration is.

Concepts of perfection, evolution, structure and manifestation come into further focus when we recognize the presence of seven in cosmic building blocks. To wit, there are seven colors in the rainbow which, alchemically speaking, is a bridge that spans the gap between mundane and enlightened.

Furthermore, there are seven musical tones, which correlate with each of these colors. Esoteric wisdom indicates the manipulation and utilization of these notes and colors will serve as a progressive path to the evolution of consciousness.

The meaning of seven dealing with perfection can be traced back to the steps taken by early astronomers (and astrologers). These stargazers identified seven dynamic celestial orbs:

Identification of these seven heavenly beauties gave way to an army of correlations that march through our everyday life even today.

For example, these “planets” were associated with deities who were said to govern the ways of the universe in many cultural accounts.

From there we see the formation of time delineation as each of these “planets” correlates with the days of the week.

Questions that may help us touch the meaning of seven:

The meaning of seven reminds us that there is symmetry, reason, and order within the structure of the Universe. Even when things seem chaotic, there is a pervasive network of structure that is comfortingly consistent in its behavior.

We see this consistency in the drive of the Charioteer who is unwavering in his goal as he utilizes the septenary forces of the cosmos to navigate his way to his destination. When we see these structures of planets, days, time, measurements, harmonies, and hues, we begin to understand why the number seven resonates with the Chariot card in the Major Arcana.

The esoteric scholar who learns the way of these foundational resonances is the master of the perfection he seeks in the Universe. Let your own scholarly studies further unfold by contemplating these attributes of seven:

Meaning of Seven in Western numerology and Tarot – a quick reference:

Visually, the meaning of Seven illustrates:

Common associations with the meaning of Seven:

Potential Personality of Seven:
People who resonate with number seven are scholars and poets. They are intelligent with amazingly analytical minds. Yet, their minds are usually in a dream world where they can move things and events to their liking. Although their reality in much different than other’s – it is a reality of their own making. These people have the ability to bring the perfect people, places, and events in their life experience that lead them on a path of consistent revelation.